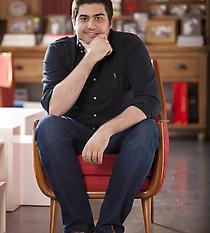 Taymour Grahne is the founder of Taymour Grahne Gallery, an international contemporary art gallery in New York City’s Tribeca neighborhood. Half Lebanese and half Finnish, Grahne was born and raised in London, followed by time living in New York and Beirut. Grahne received a Bachelor’s Degree in International Relations from Boston University and a Masters in Art Business from the Sotheby’s Institute of Art in NYC. Grahne, who was recognized by Modern Painters as one of the 50 Most Exciting Collectors Under 50, is active with museums and institutions worldwide. Grahne was also featured in Canvas Magazine’s Power 50-­‐ the region’s most influential cultural protagonists.

The Jalanbo Collection, one of the finest collections of modern Syrian art in private hands, couldn’t enter the public sphere at a better time. With Syria war-torn, and its cultural scene and ancient ruins being destroyed, we are lucky to have such an important slice of Syria’s cultural legacy in the safe hands of this collection. We are also lucky that this collection is now accessible to the public via this website. With such little information available on modern Middle Eastern art, this endeavor will be welcomed by everyone in the art world.

Rona and Walid Jalanbo started this collection in the 1980s, a period in which few people were paying attention to, let alone acquiring work by the region’s modernists. There wasn’t a Middle Eastern art market then as there is today, and for the most part, people simply weren’t interested in 20th century Middle Eastern artists. The early patronage and foresight demonstrated by the Jalanbos, among others, was hugely critical in allowing what have now become world-reknowned artists to continue to paint.

The core of this collection encompasses some of Syria’s finest modernists, including Louay Kayyali, Fateh Moudaress, and Tawfik Tarek. The incredible Moudaress’ in the collection, which also include rare nudes, are some of the artist’s finest. I remember first coming across some of these works at the Jalanbo home many years ago. Throughout different areas of the home, I found Kayyali’s figures and staring back at me. The shoe-shiners, bakers, and fishermen that Kayyali so brilliantly captured, followed me with their eyes as I roamed around the house. At a time when Middle Eastern modernists were being commissioned to paint portraits of the rich and famous, Kayyali chose the “regular people” as his subject matter. He sought to highlight the plight of the people that were neglected by the socio-economic policies of the time.

That said, what may be the greatest aspect of this collection going public is that it will inspire and enable more scholarly research on the subject of art from the region. With little information on modern Middle Eastern art accessible to the public, making this collection accessible online will allow for the dissemination of images and information.

While the modern collection continues to grow, new life and direction is also being breathed into it by Ghalia, Somar, and Khaled - Rona and Walid’s children - through acquisition of contemporary art. Recent acquisitions include works by Hassan Hajjaj, Lalla Essaydi, and Nicky Nodjoumi. The building up of the Jalanbo Collection has been a fantastic personal journey for the Jalanbos, and I am grateful that they have shared it with us all.